While Wondershare is an established name in Mac OS, Windows users can also get an experience of its products, through Filmora – the company’s flagship video editing software. Not only it offers its users the standard video editing tools such as trimming, transitions, overlays and effects you would expect from a standard video editor, but much more.

Some of its trendy features include motion tracking, multi-cam, and support for 360-degree videos. It is a powerful tool for making vlogs, short films or just uploading videos on social media or YouTube – without being a pro at video editing skills.

When you install Wondershare Filmora, you get options for four entry points, i.e., Action Cam, Full Feature, Instant Clutter and Easy Clutter. But one of the major drawbacks of it’s interface is that you cannot switch to one of the other modes after entering one, and have to restart the application.

Filmora has some really trendy tools, which the users find really useful. Some of them are :

This mode contains tools specifically designed for dealing with action cam footage and for projects related to that genre. It provides various adjustments tools, such as Fix, Speed and Colour. Fix tools include lens fisheye correction stabilization and denoise. Speed lets you apply freeze frames, speedups, slowdowns and repeats. Colour includes not only saturation, tint and temperature, but also lighting adjustment for brightness and contrast.

This mode takes you the full editing interface. It features a three-panel layout for source content, video preview, and timeline across the bottom. It sports a clean, simple and dark interface, with non-skeuomorphic controls. 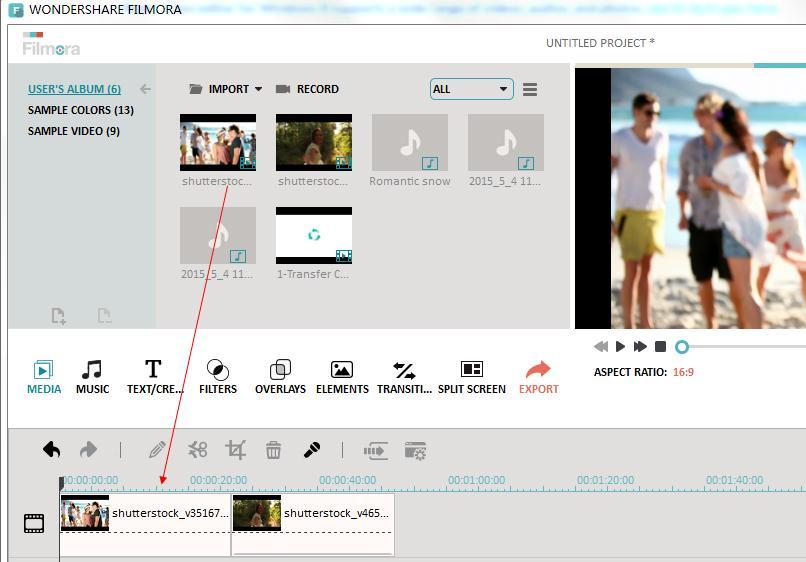 This feature launches the program into a semi-automatic mode which makes use of style templates that you add your video, images and audio to. You then have to follow a step-by-step process through to a final video.

You can simply drag a few video clips or digital photos onto it, choose a theme, select music and voila, your video will be turned into magic! The default installation contains six themes: Simple, Happy, Sport, Love, Travel, and Old Days, but you have to actually download content to use all except the first, and several of them are still in the Beta Mode.

This is a tool for loading footage and it offers the ability to instantly isolate segments of that footage and render immediately to a new file.

This mode is actually very easy to use. You can drag multiple clips onto its windows, but only if you have selected its Merge sub-mode. The Trim mode is just for trimming the ends of a single clip, and it’s interface doesn’t even show more than one clip in the left-size source tray.

Wondershare believes in making technology simpler for the masses, and staying true to its motto, Filmora has a clean and simple interface. But I didn’t find it very convenient for touch-screen use. In the screen, access to everything is represented by a simple icon that indicates what it is used for whether it be video, audio, effects transition or more.

In Storyboard view, users have to simply drop imported media into the filmstrip image wells below, and then add any necessary transitions or other basic features to quickly and smoothly assemble any video. Double-clicking a clip brings up an inspector panel where an assortment of pictures and sound adjustments can be made, including brightness, contrast, hue, saturation, or rotation.

Timeline view offers a more traditional interface across the bottom of the window with separate tracks for video, effects, photos, titles, and music. From here, editors can drag-and-drop, rearrange, trim, split clips, or even record a voiceover without leaving the application.

Yes, just like most of the high-end software editing programs, Filmora has an inbuilt screen recorder function.

You can launch it from inside the program and start recording whatever you are doing. It is especially useful if you want to make demonstration videos.

Filmora also has the ability to handle green screen or chroma-key footage in your video projects.

It comes with face detection technology so you can automatically attach objects like speech bubbles to a face or to an object that is moving and have it follow along.

It has quite an effective stabilization filter that automatically enables to eliminate the effects of any accidental camera shakes.

It enables to customize your audio tracks prior to export by detaching it from your video clip and edit it separately to get audio tracks as per your taste.

Unlike most of the common video editing softwares out there, Filmora surprisingly offers most of the output options you might ever want, such as AVI, FLV, MKV, MOV, MP4, AND WMV. There’s even an animated GIF choice. While choosing an output format, you can also choose quality settings of Best, Better and Good. There are also buttons for creating and uploading Facebook, YouTube and Vimeo Movies.

Also, you get an option for DVD burning too, although you won’t get any DVD menu screens and chapters as you would expect from a high-end video editor.

Filmora is a great video editing software for beginners who want to create professional level videos. It also sports an eye-soothing interface with a lot of trendy effects and tools along with the basic video cutting and good output options.

It is the best video production software out there in the market for basic cutting and lot of modern and Hollywood Style filters. But professional video editors would not find it suitable since it does not offer much very advanced results for high-end effects such as denoise and stabilization.

Overall, Filmora is a value for money video editing software for Windows 8 and other interfaces, which offers tons of advanced tools modern video effects which will help you to create videos with unmatched perfection every time.

What is a Liquidity Gap and Why is it Important

3 Reasons To Include a Blog On Your Company Website

How to Look After Your HVAC System

7 Tips to Ensure a Safe and Positive Workplace in 2022